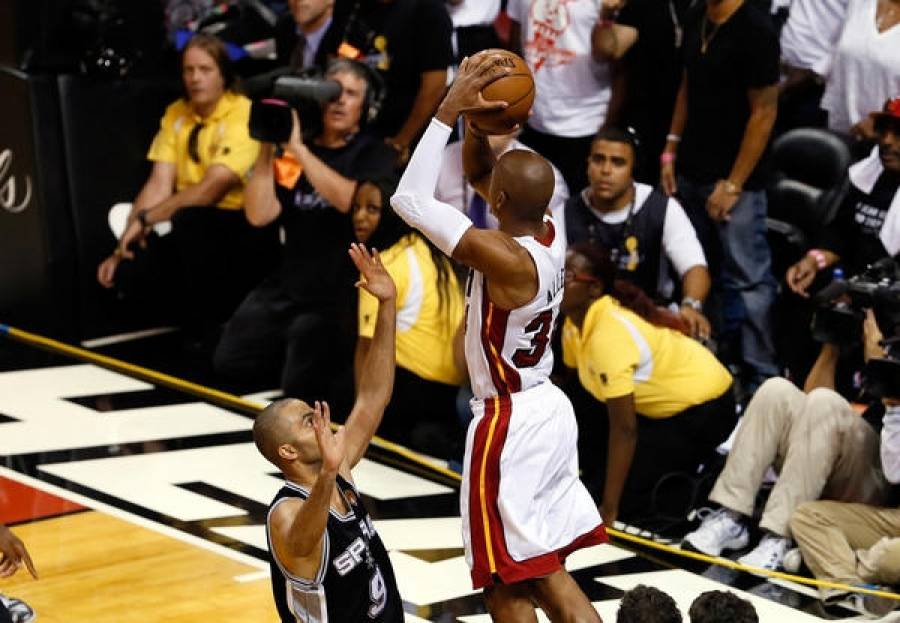 Why (fortunately) there is not Europe

"Once upon a time, Miami Heat and San Antonio Spurs were faced with the NBA finals ....." If there was no internet, it might be that a narrative could begin some years later, by a man who was happy to seeing these finals in another who is not our generation and of course he would not have this possibility. A dreamlike series of finals from the best basketball fairytale that he did not miss out on anything. With close games offered for cardiac episode, eruptions on both sides, tripos bombardments, triopled record (1 and 6 final), extra time (6 final) great shot to be left in the story (Ray Allen in 6 final) are just some of what we saw in these fantastic seven races.

However, if one of the above is more intense, this could not be more than the tremendous three-pointer achieved by the top three-pointer in the NBA's history, sending the game to 95 (95-5.2) before the end and the famous yellow ribbon and trophy are already in the pitch for the award. What finally did not happen after the match was considered in favor of the Heat in the extra time and the debates on whether Popovich should have commanded fouls in the last attack of the Florida club, Still, these things for those who have seen even a minimal NBA in their lives are very clear about the attitude they have in America in such cases, with the Italian journalist of Gazzetta Dello Sport not surely in between since otherwise he would not have even thought of asking the technician of the "spurs" why he did not order a foul. The latter could not have misunderstood the question, saying: "That's one euro a question for play, right? ", to continue (screaming) the Italian saying," We (in Europe) are fooling "and end the conversation with one of the very great coaches to say to him: Yes, you are fooling We do not do here. "

Did the Italian, following the words of Pop, understand why this foul has never happened? We probably will never know it, unless one was found to explain to him that in the top basketball championship of the planet, what counts above is the and how the whole game will make it more appealing in order to "sell" it to the viewer. And the Americans unfortunately or fortunately know well ... the art of "selling something to the people", as of course and of the spectacle.Here (in Europe in general) we would still perform (with 1-2 points difference in the match) to find a player who will just throw the ball behind the center, and then .... Then, afterwards, for years they will remember Ray Allen to score one of the biggest shots in the NBA history at 5.2 before the end and to send Miami out of the hell of a lost league to the paradise of his 7 match. Here (especially in Greece) years later they would still talk about why the Spurs did not fool them, and there they were this is never going to be heard, because there they leave the protagonists of the sport to talk and who do not look like they will "steal" a match that can not be judged (as has happened and has been infinite times) in favor of the team that is ahead with three points, sending the opponent to the shots and then the opponent. If you are better you will win, if not win, so simple, you do not need any shot to judge a game or even a title, so we have lose the "big shot" account you have you are going to find a target in the NBA. Because this is the essence in the sport, the spectacle. Because that's what you will remember after years, a big shot that has passed in history and not two players going from one side of the stadium to the other. they are making shots.For simply, this is the NBA ...

YC If you have a different viewpoint, just think about why you stay in the evenings to watch an NBA match and what you expect him to offer you.

PS 2 Because the signatory wants to say it all, he has been a fan of the Heat for about a decade. This of course does not play any role in the view I have and which I mentioned in the above article. The same I would write and in the opposite case .

PS 3 I also wanted to express my opinion on LeBron James, but in order not to spread a "bed sheet" I will make it directly to another article.

+1 sacking23
Send Arji to Ligia after he got them all to see how far he was in the last attack.
Now without paying the NBA, although it is "out of the ordinary" at many points - you do not understand why you do not watch a European basketball - it still has some of its "balls" that can have positive / spectacular consequences but many times and negatives with each to do what he wants (pick a match in Sacramento and you will understand what I mean).
+1 Alekos Syssovitis
well said ...
Refresh a list of comments
BETTING NEWS

Pamestoixima.gr: Paris - Manchester G. with a great offer!
The action culminates with the start of the Champions League groups and what better with the holding of the great match Paris - Manchester United at the "Parc des Princes" tonight, which plays with a super ... Read more
EVALUATION OF ORGANIC