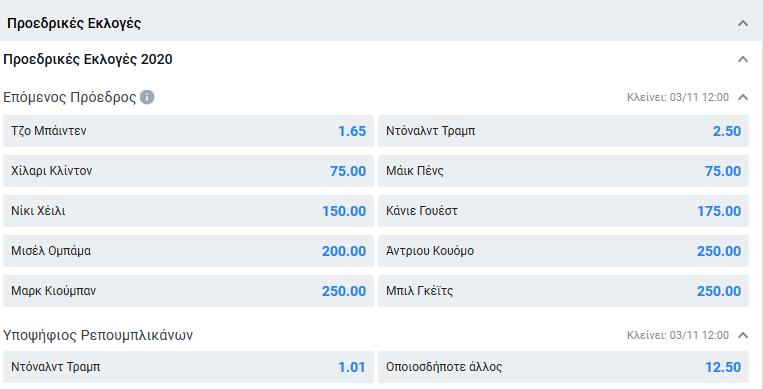 The favorites for the next president in the USA

4 years ago, o Donald Trump prevailed over Hillary Clinton having won the trust of most voters in the 52 US States. So this year he is one of the two candidates for the next presidency of America. However, he is no longer a favorite, since his odds rose from 1.95 to 2.50.


His big opponent is Joe Biden, on the part of the Democrats. The 78-year-old was vice president during the Obama presidency (from 2009 to 2017). Until then he was a senator for 36 years (since 1973) in the state of Delaware (near New York). He now intends to become the oldest president ever in America and is the favorite to become the next Planetarium. Its yield is at 1.60.

Same battle for the emergence of the first party, of course between two. On the one hand Republicans (1.90) and on the other hand the marginal favorite, the Democrats (1.85). The possibility of another party coming out is considered almost unlikely, which is why the odds are at 100.00.

The Democrats are interested in the position of vice president. There are so many names and the odds are high. The first speaker is Kamala Harris, a lawyer and current senator in California (1.75), while close by are Elizabeth Warren (7.50), Amy Klobukar at 18.00 (lawyer and senator in Minnesota) and Stacey Abrams at 15.00


I intend to play Trump

If you want, write a justification of your proposal in your own words since it is forbidden to link from other sites.

Waterproof said:
I intend to play Trump
Click to expand ...

I wholeheartedly wish you a bucket
Reactions: game and Water resistant

I'm really surprised by Biden's choice by the Democrats. It is inconceivable that this man was placed opposite Trump. We are talking about suicidal tendencies.

On the other hand, I do not think that the performance of the bettors in Trump's victory hides any significant value. Of course, it will probably go up even more, so if it gets close to 3, the data will change.


PS At the political level, Greece is not going to benefit from the dominance of one of the 2.
The phase is front cliff and back stream.