Olympiacos-Panathinaikos: Derby from the old days 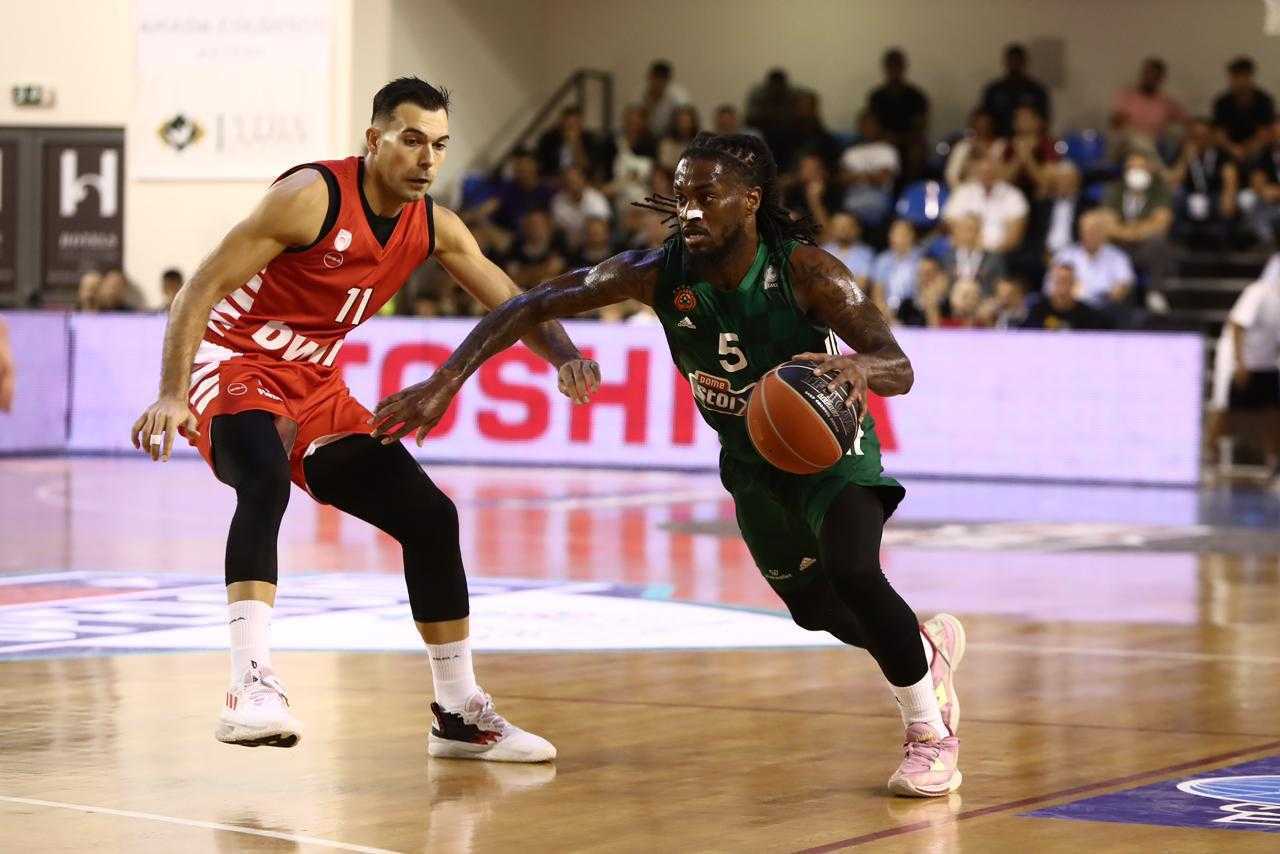 The glittering showcase of the Stoiximan Basket League turns on its lights. Olympiacos and Panathinaikos enter the court with the promise that they can give us a derby from the old days. The European basketball spotlight is on the Peace and Friendship Stadium this evening.

The great Greek derby of "eternal" returns. At least that's what he promises us. The promoted Panathinaikos of the last two weeks visits Faliro to face the champion Olympiacos. The greens count three consecutive victories in the Euroleague (which is the best platform for evaluating the dynamics of the two teams), while the red and whites have been defeated in two of their last three meetings (away against Maccabi and Anadolu).

Can the "clover" play their last card for home advantage in the Greek league? Will Olympiacos confirm its competitive superiority by overcoming the psychological obstacle that traditionally stands in the way of the favorite in these matches?

In the land of spiritual challenges

These derbies simulate participants in a virtual world of intellectual challenges. Everyone (athlete or coach) opens new doors by exploring their limits, psychological strengths and competitive potential. The wrapping that accompanies the No. 1 game of European basketball creates, in combination with the Greek sports culture and the passion for sports, "generates" a special regime of pressure.

You come out a different person after these matches. The fermentations that take place inside each one vary. The seed takes hold only if it finds good soil. There are athletes who were launched and others who fell apart, taking a long time to recover. These nights give birth to "legends", winners, love of the stands, new contracts, build or break careers and create indelible memories. This is why the management of the spiritual part is the basis for building every tactical plan and executing every action within the four lines. From there begins the mental preparation of such a game. Without it, you can't run anything.

So everything plays a role in the thinking of the two groups. The past, the present, the form, the experience of specific athletes or even the match between them that follows at the end of the month. Managing such details is important. And the experience (as an individual and as a group of professionals) accelerates the process of emotional emptying. It's important to put everything out of your mind and go in to play those 40 minutes like there's no tomorrow. But realistically speaking, this is not always possible. The particularity of the psychological piece often invades the floor and determines the balance. Welcome to the Greek "eternal" derby...

But let's look together at some elements and tactical parameters that will shape the competitive framework within which the match will be held today at the Peace & Friendship Stadium.

-The results of the two teams in Europe lately have created an illusion that Panathinaikos is approaching the level of its great rival, but this is not the case and the best thing they have to do in the green camp is to understand that this process (which leads to such a competitive level) requires time, patience, a lot of routine and consistency.

The red and whites are ahead as a group because they have walked a certain route together. They are the best team between the two. Can Panathinaikos win in Faliro? Of course. There is no doubt about that and it is something the home team should be well aware of. Let's not forget that the greens left SEF with the victory last year in the corresponding match.

-The way in which the two teams will enter the game is important. The rotation and reversal are now the norm in modern basketball with the speed at which it is played, but today we are talking about a very special condition. Olympiacos will try to send its message early, capitalizing on the momentum that the home will give it.

Trying to stop this aggression will be crucial for the visitors. If Panathinaikos falls behind early, they will likely be in significant trouble. Conversely, if he is at the head of the scoreboard (or at least latches on to the home team's back) while maintaining his composure, he will send the pressure to the opposition.

-The defense in Fal. It's interesting to see coach Radonic's approach here. No-coverage defense to freeze the Reds' shooters, or assists and an option to participate in the three-point roulette? Olympiacos is not a great shooting team, but they have players who, if they connect early with the basket, can kill any defense.

Fal is an important part of the red and white production process as, in addition to his executive acuity down low, he is also an excellent passer. Gudaitis brings a combination of size and weight that was missing last year from the "clover", but in this matchup it is estimated that he can help Panathinaikos more offensively (as a point of reference in the low post), than defensively on the French center.

Giorgos Bartzokas will look early on to find the beneficial derivatives of Fal's game down low, but without the home team's attack becoming predictable. The most correct approach for Dejan Radonic will probably be to investigate the chances of success of each tactical approach a few possessions deep, being ready to activate the alternative until he finds the compatible – for this particular night – option. Olympiakos has one of the most effective low post attacks in the Euroleague (No. 5 with 1.034 points per possession), while Panathinaikos has shown that it needs work in this area by accepting 0.929 points per such possession (No. 12).

-Papanicolaou vs. Bacon. We enjoyed their duel in last year's playoffs and I think everyone thought about their fight in those games when the greens announced the American scorer. In that series, Bacon averaged 15.0 points on 22/46 8-pointers, 18/2.2 1.4-pointers and XNUMX assists for XNUMX turnovers.

Papanikolaou is very experienced and has successfully handled similar challenges in the past. He will be aggressive and try to get into the American's mind, keeping him away from his good spots. Bacon is super talented and one of the few players in Europe who can hit contested shots with great fluency, from any distance. But he needs to improve his shot selection. Bad choices can cost his team in such a match.

-Wezenkov vs. Williams. The battle of the scorers. The individual talent of the in-form American against the ideal scorer through the system, who projects as a favorite for this year's EuroLeague MVP. Vezenkov is Olympiakos' heavy artillery and his offensive efficiency overshadows the fact that he is also good in areas such as rebounding and defense. Williams is coming off a great match in Kaunas (he was also excellent against Virtus) but now he will need to surpass himself at the back by staying "together" in the executions of the red and white forwards.

-McKissick vs. Pontitka/P.Kalaitzakis. One of the main problems of Panathinaikos in the derbies of the last two years concerns the activity of the American swingman who has created a mini-tradition of good performances against the "clover".

Panathinaikos had considerable difficulty in matching the dynamism and athleticism of McKissick, but this year it has the "tools" in its roster to do so. The hard-nosed Mateus Ponitka and Panagiotis Kalaitzakis represent the model of the side that has been missing from the clover for the last two years and will be called upon to stop the advances of the Olympiakos American.

-Lee's pressure on Sluka and the transition game. Another duel that stood out in last year's Olympiacos-Monaco was that of Kostas Sloukas with Paris Lee. Panathinaikos is betting a lot on the effective pressure that the American can exert against one of the best guards in the Euroleague. Slukas is experienced and will let the game come to him, trying to wear down the visitors' guard. On the "field" of PnR actions (mostly) this battle will be decided. Note that the weak point of the red and white defense is the Roll Man in these situations. Lee and Walters will try to feed Papagiannis continuously and the red and white defense must be ready.

On the other side of the floor, Panathinaikos' transition defense is one of the most important parameters in the match. With 1.485 points/possession, the "clover" has the weakest transition defense in the Euroleague. It is a given that Olympiacos will target this weakness of their opponent, finding rhythm and points in the open field. Papanikolaou-Wokap's aggressiveness at the back and Vezenkov's productive ability will be the keys in this direction.

The recent (but also permanently temporary in our sport) differentiation of the dynamics with which the two teams arrive at the big derby gives a special color to today's match. Panathinaikos is in a good playing condition and can compete with a team like Olympiacos, but today the mental strength of the Radonić group will be tested. The red and whites remain the favourites.

Bet Builder with Handicap Olympiacos-6.5 and Moustapha Fall Rebound 5+ at 2.26 odds at Stoiximan