After a month and a half, from the normal start of the championship, the championship in Iceland begins.
While the cup starts on 5/6.
We will be in touch, the first match will be a derby between Valor and KR Champion
Reactions: giannisthegreek, animusbet, Eric Castel and 1 even a user

Good evening to the company of friends of distant and icy Iceland.
The championship starts today in Iceland, with only one match for the premiere.
Opponents are 2018 Champion Valor and last year's KR Champion.
A very good match is expected, between two of the top teams on the island.
The transfer movements of the teams are few, mainly due to the coronation, so the development will show us the dynamics of the teams.
My opinion about today's match - derby, is that we will not have a big score (unlikely for an Icelandic match, but ...), as well as that it will be judged on one, or no goals.
I think the 2 DNB and the man have a good chance.
Reactions: georgesv53, knack and animusbet

At 21:00, the match between Kopavoyur and Hafnarfjordur starts.
In any case, the double is the most logical result. And while performance is around 2,00, then this is a good opportunity.
Reactions: knack and Ertzan

For today, the menu from Iceland has two matches, the first one we will leave in its quiet, except for someone who wants to counter it, because the ace of 1,35 does not convince me with anything!
Stiarnan - Filkir, I see it for pure ace, with ah -1 for better performance.

Yesterday went well, not completely, but well
Vikingur's match with Fiolnir ended 1-1, so if someone followed the match as I said, because the ace of 1,35 never came!
Stiarnan's other match against Filkir ended with Stiarnan winning, albeit with difficulty, in 92 'for accuracy, with a final score of 2-1.
Reactions: Tchami

The first race was very good for here, I hope the same happens for the second one that starts today.
With 3 matches, the curtain opens on the second match today in Iceland, for the first division (Urvalsdeild).
I singled out the double of Vikingur (2,30 h bet 365), in the headquarters of Akureyri, even in DNB, the odds reach 1,80 (bet365)!
The other two matches are theoretically easy, but they hide pitfalls and a surprise ...
Reactions: animusbet

For today, I will make an effort from the second category and the ace of Fram.
Good luck with what everyone chooses.

The match between Akureyri and Vikingur ended in a draw, without a goal, half a loss!
Fram's match from the 1st deild, ended with an easy ace for Fram, with a score of 3-0.
Reactions: animusbet

Good evening with the company

The second match continues today with three matches, in the Icelandic championship.
The first in the series is the match between Fiolnir and Stirnan, at 19:45. Favorite double, but I prefer goal / goal
At 22:15 are the other two matches. I won't bother with Filkir - Breindablik, unless I oppose Blik.
The main course is in the match Hafnarfjordur - Akranes! Hafnar is again the favorite, but Akranes has shown us her teeth this year, she came back refreshed and dangerous from 1h Deild. Anyway, again in the ace I see the match, but here we will have goals from both teams.
Good luck

Traditionally, the great Hafnar is an ace, we love her ... it's not a terrible performance, but ok ... 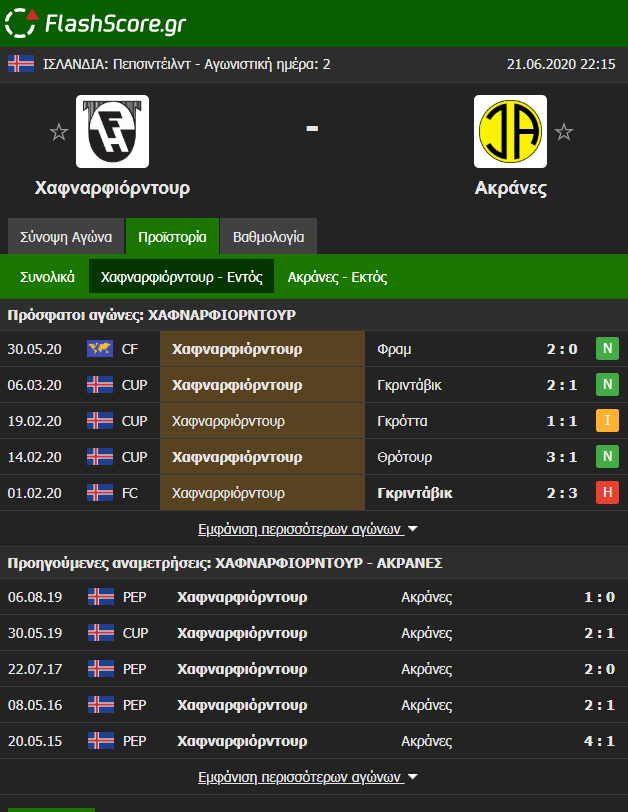 Good evening to our company

In general, the second match went well for our issue.
Stiarnan won away from home and even comfortably against Fiolnir, with 1-4 (the home team also scored).
For Blik, we said not to worry and we did well, he won away from home, with the poor 0-1, but ok.
In the match that had attracted the most interest, Hafnarfjordur won the good Akranes, with a score of 2-1, ace, over and goal / goal.
Excellent !
Reactions: nklaps, Mixalis81 and Eric Castel

Good evening with the company

It was a racing game without saying anything here, but there was a reason ...
Today begins the fourth game, with one match. Valor welcomes Akranes,
The ace looks easy here, but I personally don't have him for sure and I have my reasons.
Yes, Valour has two wins and one defeat, but the victories were made with inferior opponents, such as Grotta, who was promoted to the big division for the first time this year, and Copa del Rey, which is very weak, while losing in the derby of the first match, in the headquarters. from KR.
Akranes, who won the first game, then lost twice, but one of the strongest teams on the island, Hafnarfjordur away from home and champion KR, however, lost very hard in both matches, with the same score, 2-1 and 1-2 scoring in both matches. I have seen both matches and in fact she played very well in both and the result of both matches is unfair ...
Without further ado, I believe that today Akranes will play a good match again and maybe he will manage to get something out of the match. The 1,35 - 1,40 of the ace, we do not touch it with anything, while the D.E. sto X2 and ah -1 for Ukraine has value and very good performance, over 2,30.
Reactions: nklaps, BetLaden, Fairplay and 4 others

Good evening to the company even today

Very hot here in our country, but again good that we are refreshed by the results from the cool Iceland.
Akranes not only managed to get something from Valur, but also took her wallet inside her house! Her 1-4 victory proved that not everything I mentioned yesterday was accidental.
Reactions: nklaps, Mixalis81, georgesv53 and 4 others

For today, the only thing that makes me click is the overcrowding and goal in the Reykjavik derby, between KR and Vikingur.
We leave the other two aside ...
Reactions: nklaps and georgesv53

Good evening to the company, after two days apart ...
I see that KR beat Vikingur, but without conceding a goal!
So what I expected did not happen.
Wait until the next match.
Reactions: nklaps, knack and ALEX
You need to login or register to reply here.
Common use:
Facebook Twitter Reddit Pinterest Tumblr WhatsApp Email Address Link