Vassonia, however, made two corrective actions. After Christon he took his younger brother Dragic.
K

Let's get some thoughts on PAO's "huge" team. As the wise Pitino said, the team plays as if they are in the all star game !!!

1) Pitino disappointment this year. With the same team last year and +5 players and has managed to show ten times worse face. Mainly in the defense from which he loses almost all matches.
2) This Kalathis finally has to understand that he can't waste 3 fouls in each match to make 2 steals. A thousand times 5 points less than the team with 3 fouls early in each match and 4-5 in the final minutes. He needs to understand that we have no one else to make such a silly foul.
3) How much worse would Pappas be for 10 minutes than having to play critical with 4 players on defense when playing with Fredette, Rise?
4) How much longer do we expect to play with 3 players in ace two and 1 player in 5?
Basically being in the 6th is a great feat if you consider these 2.
Whenever we work or lose the ball ...


To close, the team is marginally a team of 8 and as weird as it may seem, today's defeat looks like a victory since we kept the difference with the team that will probably play for the 8th place.
Personally, what they say we are hitting 4 guys seems so ridiculous ...
K

Now I think Khimki has locked it up and I'm going through it. If something changes I will return it. Anyway I'll leave basketball shortly and get back to tennis ...

I also throw a football. After a 2-0 draw that should have been a lot bigger and after the last-minute match in Toumba, I think the 6-yard multi is far from over.
And PAOK is absent.
K

The conclusion of the race:

PAO and Khimki are competing for what is the most ridiculous team in the top rack.
Anyone who has seen the last 2 minutes of one and the last XNUMX minutes of the other understands what I am saying.

I won't even go into the subject of coaching to be nonsense, but Kurtinaitis and Pitino have been competing for this honorable position for the past 1-2 months.
Reactions: animusbet

Kavajim said:
PAO and Khimki are competing for what is the most ridiculous team in the top rack.
Anyone who has seen the last 2 minutes of one and the last XNUMX minutes of the other understands what I am saying.
Click to expand ...

Well, Khimki does. Let's pay her no entry to the octave ...
K

That's for sure. It's just ridiculous to lose.
Half of her defeats:
1) It is preceded almost to the end
2) For 2-3 minutes makes a pointless foul without aiming to give opponents a shot
3) It loses a shot
4) And finally Shved weighs 1-2 triples from 10 meters in the first 5 '' of the attack
K

And then we talk about PAO !!!

Lately I've been talking for more than 1-1,5 months doesn't want us. I lose bets on the chuck, I lose 2k out of 1,3 and generally when I am between 2 bets for some reason I always choose the wrong one.

Yesterday I had been playing under for days and I just saw the 2 new absences of OSFP I went to both the handicap and the double. The result is that we have gone from victory to victory.

Today I was between a marginal CSSKA victory and the Under. I even tried to find it, but nowhere.
So I ended up in the under but then for some reason in the end I dropped 2/2 maybe we were seeing some outburst but Real.

34-36 and a few seconds for Red to drop the ball and the player throws a 3-pointer and 9-10 meters with Heins stuck.

I don't know if CSSKA wins in the end but hell with me.

PS: In a race with 4-5 thoughts and eventually 2 bets (I had one in 2 in mind) I finally played the wrong bets and the 3 I let go.

I don't say that often here, but something went wrong and I think I'm going to make a few last bets if the situation doesn't change

CSSKA has been rotten for a long time without their attacks. The last three-point unbelievable. The uncertainty and ineptitude that continue will make CSSKA a desirable opponent for everyone else in the Play Offs.

Kavajim said:
I don't say that often here, but something went wrong and I think I'm going to make a few last bets if the situation doesn't change
Click to expand ...

In general, the Euroleague is difficult to bet on, but I think this year is even more fluid. For me this season it is overly destructive ... I have delivered the weapons for this year, but when your choice clicks, I follow you. You're up to date, I wish you good luck then.
Reactions: Kavajim and vaf3

The tripod we called ... 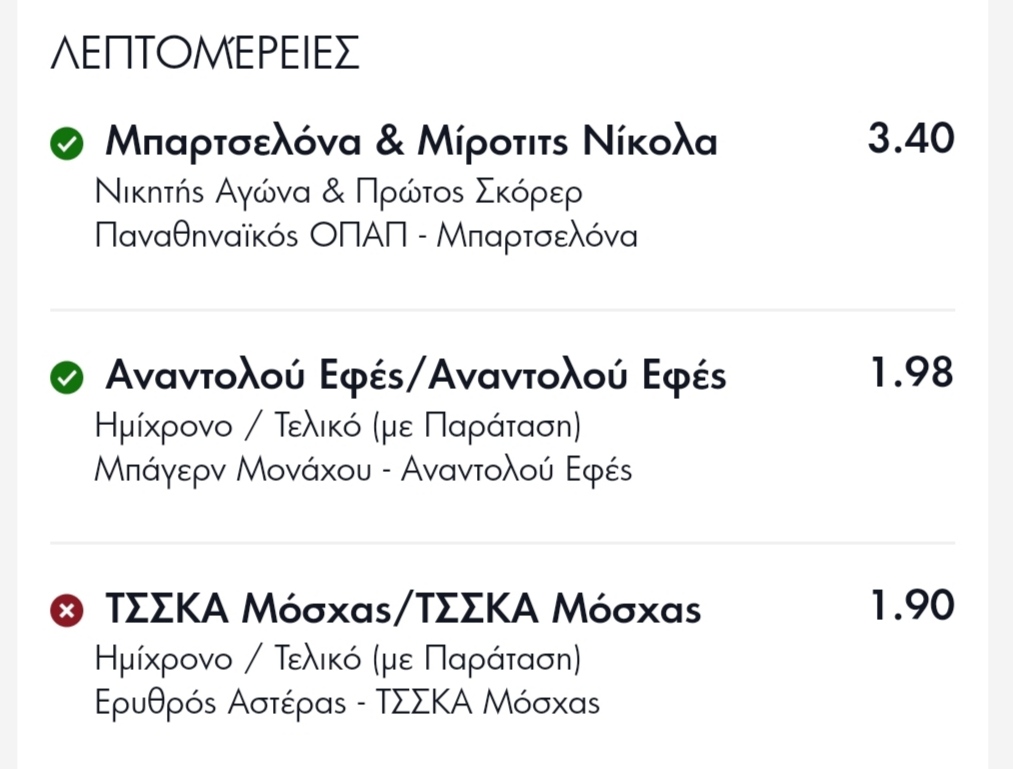 I'm not talking about misfortune then, because yours is about to hit the head on the wall
You need to login or register to reply here.
Common use:
Facebook Twitter Reddit Pinterest Tumblr WhatsApp Email Address Link

Forum Bot: BetLaden has launched a new theme called "Happy Month" at the Cafe. Yesterday at 3: 41 MM
Chat 0
Principle Below