Shakhtar Donetsk-Manchester City is the first game I will be playing tonight on the second day of this year's 1 Champions League.

The home side - although the match will take place in Kharkov which is not their home base are used to playing outside of Donetsk - have already begun their usual walk in the domestic championship. They count 7 / 7 and have already taken 7 points from second. Few changes compared to last year, generally do not have the same poison compared to the recent past, in this light the international extremist Konoplianka, excellent move. The new coach Louis Castro follows in the footsteps of his predecessors, focusing on good traffic and the creation of many phases. Today he will have to adjust as City are known to have huge ball possession rates, so Shakhtar's response will be interesting. Except for the multifunctional midsole Maicon.

And yet the trains are stopping ... a buzz for Guardiola's team on Saturday, defeating 3-2 at Norwich headquarters which has managed to expose the defensive weaknesses of the "citizens". Reliability and imbalance in relation to the rest of the roster issues there, in contrast to the middle and front individually but also collectively makes ... popes. Stayed at -5 by pioneer Liverpool, however, Pep's big goal this year and everyone else in the team is winning the League. A trophy missing from the English team trophy, to win it must give it everything and be a knockout serious, I think the team has focused entirely on it in its 'mind'. Loport and Stone will be missed, the first one seriously injured, huh, and Shane is unavailable.

If City had beaten Norwich, it might have been a snap of relaxation. Now that sounds difficult, the quality difference is huge and given. The volatility of the English defense made me think twice with goals and goals, but I think with Shakhtar's great possession there won't be too many opportunities. I choose it double and over 2,5 on its 1.80 Stoiximan, even if the match goes through 0-2 I think City will still be looking for a goal ... 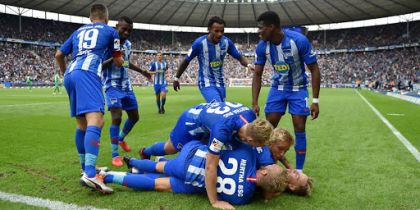 Betting Forecasts and Germany, Poland with 0% rake!
Η 29th game of the Bundesliga continues today with their main menu five confrontations. Four of them are being held in 16:30, only the match Bayern - Fortuna is set for them . Read more