We will deal with a postponed match from the championship of Belarus this time. The tail of the score Smolevichi welcomes her FC Minsk which is only five points away from the positions leading to relegation but having given two games less.

The home team has thrown in the towel and with the defeat by Rukh Brest with 0-6 completed six consecutive defeats with a goal of 3-23. In general, in Belarus there are many teams that face financial problems, one solution is the ones borrowed from other teams (Smolevichi has ten) just enough for the year to come out and not affect the league from the departure of a club, but when it comes the licensing time for the new season things will be dark.

The guests after the change in the technical leadership appear improved and are not expected to get involved in the battle to stay in the category, as long as of course in matches with lower dynamic opponents they collect points. In the most recent match against Neman, the pleasant surprise of the championship was the 2-0 defeat, although the game was divided and judged in detail.

On the one hand, Smolevichi seems to have given up for a long time, while on the other hand, Minsk is in good shape and has a great opportunity to move even further away from the lower echelons of the standings. The 1.73 offered for double (2) h interwetten is satisfactory.

The first contact with the bet took place in Euro 2004 seasons when I was still a teenager. Since then a lot of water has flowed in the ditch and now I can say that thanks to that my knowledge of geography is at an excellent level. My relationship with him has gone through various stages since over the years the ground bet in the OPAP agency was replaced by the online one while at the same time I started to turn from a loser to a winner. But beyond the profit, what gives me great satisfaction is the "study" that must be done to make the right choice. This may be the first time I am in this position, but I believe that we will emerge victorious in the battle against the book. 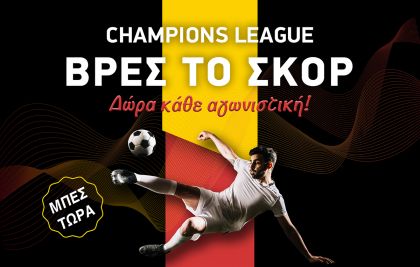 Champions League Competition: Returns with great interest
The UEFA Champions League returns to our screens and with it the big Infobeto contest: "Find the score and win prizes". With great games to be scheduled on ... Read more